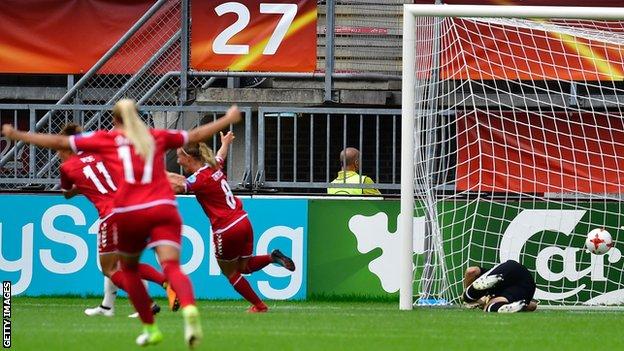 The pre-competition top picks – last thumped out of this opposition in 1993 – had driven when Isabel Kerschowski terminated in at an early stage.

Be that as it may, Nadia Nadim gestured Denmark level after half-time and Theresa Nielsen’s late header finished the rebound.

It is just Germany’s third misfortune in the 26-year history of the opposition.

The Olympic champions – positioned second on the planet – made a lot of possibilities but on the other hand were much of the time opened up at the back by a Denmark side who, after a cheeky begin, turned out to be progressively perilous.

The opener came politeness of a goalkeeping mistake, as Stina Lykke Petersen misinterpreted Kerschowski’s wild shot from the edge of the region and could just repel the German’s shot in to the net.

After the break, Germany delayed when they thought they had surrendered a free-kick just for the official to play favorable position that Denmark took, with Portland Thorns forward Nadim bouncing admirably at the far post to gesture in the equalizer.

A lot of openings for the two sides took after as the amusement wound up plainly extended with the possibility of additional time approaching.

Another conservative cross discovered Nielsen unmarked in the Germany punishment range on 83 minutes and she made a beeline for start wild Danish festivals.

The outcome ensured that the competition will have an alternate victor surprisingly since Norway’s triumph in 1993, with Germany having won the accompanying six European Championships.

The match must be rescheduled for 11:00 BST on Sunday after exuberant rain fell on Saturday night in Rotterdam.

That implied the quarter-last was one of three to occur on Sunday.

Britain confront France at 19:45 BST after Austria’s meeting with Group D sprinters up Spain, and the victor of that tie will play Denmark in the semi-finals on Thursday.