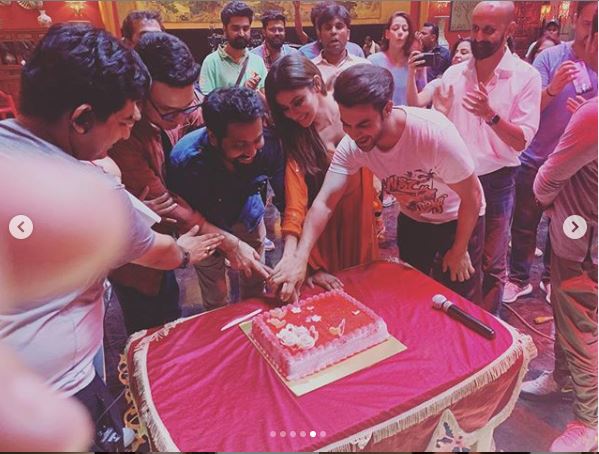 New Delhi: The Rajkummar Rao and Mouni Roy starter ‘Made in China’ on Tuesday announced the wrap of the shooting of the film.

Mouni posted a series of pictures directly from the sets of the film on Instagram, where the actors along with the crew can be seen smiling and enjoying their “Trip” to the fullest.

“Oh, what a trippppp! MADE IN CHINA,” she captioned the post.

A cake was also cut as a part of the celebrations and both the actors were seen posing and clicking selfies with the entire team of the film.

The film is based on the life of a struggling Gujarati businessman, Raghu (Rajkummar Rao), who embarks on a journey to China in order to make his business flourish. The hilarious journey and several experiences help the ‘Newton’ actor to become a successful entrepreneur later.

Mouni will be seen in the role of Rao’s wife (Rukmini).

The movie also stars Boman Irani in a pivotal role.

The film has been directed by National Award-winner Mikhil Musale, who won the best director for his 2016 drama-thriller ‘Wrong Side Raju’.

Dinesh Vijan of ‘Hindi Medium’ fame is producing the flick.

‘Made in China’, originally set to hit the big screens on August 15, will now be releasing on August 30.

Rajkummar will be seen next in the horror comedy ‘Rooh Afza’ opposite Janhvi Kapoor and in ‘Mental Hai Kya’ with Kangana Ranaut.