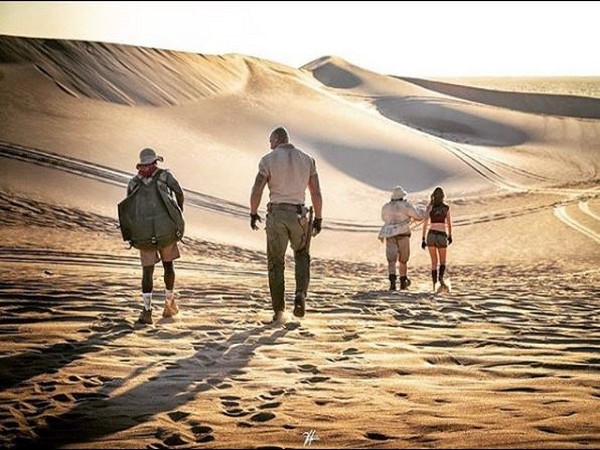 New Delhi: Dwayne Johnson aka ‘The Rock’ announced official wrap of the sequel of ‘Jumanji: Welcome to the Jungle’ on Sunday.

‘The Rock’ shared a picture with co-stars Jack Black, Kevin Hart and Karen Gillan on Instagram, captioning it as, “And off into the desert sunset our favorite video game avatars go.”

Announcing the wrap of the film and expressing gratitude to the people involved, ‘The Rock’ went on to say, “Ladies & gentlemen that’s an official production wrap for our new JUMANJI. Thank you to EVERYONE and EVERY COMPANY who has committed your time and talents to making our film the best it can be for our audience.”

“And most importantly, THANK YOU JUMANJI FANS WORLDWIDE for making our franchise a success beyond our wildest dreams”, he added further.

“Love ~ Dr. Smolder Bravestone. Ruby Roundhouse aka The Killer of Men. Professor Shelly Oberon. And Moose “I have the magic backpack bitches” Finbar JUMANJI THIS CHRISTMAS,” he wrote.On the other hand, ‘Avengers: Endgame’ actor Karen, who shared a picture with Dwayne on Saturday, mentioned original ‘Jumanji’ to be her top 3 films of all times.

“The original Jumanji is in my top 3 films of ALL TIME! So it’s sufficiently insane to think I ended up in the game myself,” Karen said.

Jake Kasdan, who has co-written the film with Scott Rosenberg and Jeff Pinker, will be directing the film. The film will premiere on December 13.