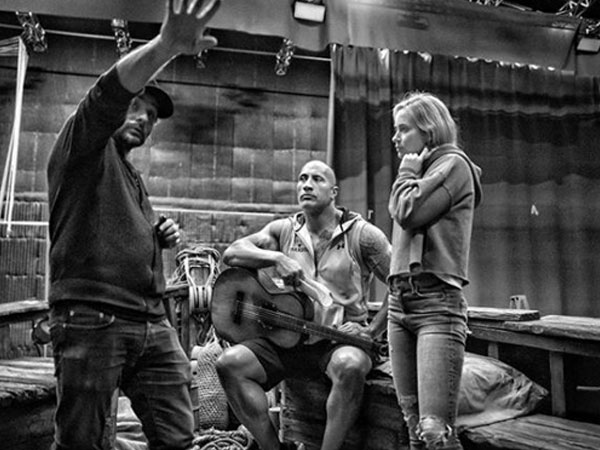 New Delhi: Dwayne Johnson aka The Rock who recently wrapped up shooting for his upcoming film ‘Hobbs & Shaw’ treated his fans with a beautiful picture from the rehearsals of his next flick ‘Jungle Cruise’.

The ‘Baywatch’ actor posted a monochrome picture and wrote. “Just wrapped Hobbs & Shaw and had to switch gears for rehearsals for DISNEY’S JUNGLE CRUISE with my brilliant co-star, Emily Blunt. Our visionary Spanish director, Jaume Collet-Serra leading our production with cool and edgy storytelling. And I’ll continue to play my guitar in chords that don’t exist and deliver my character’s very bad, but oh so good PUNS that annoy the shit outta ol’ toots here, Emily. Hard to express the fun we’ve all had on this epic adventure of a movie. Based off of the iconic Disney ride, JUNGLE CRUISE.

In the picture, Rock can be seen sitting with a guitar and trying to concentrate on what is “visionary” Spanish director is trying to explain, while Emily also seems to grasp what the director is explaining.
Johnson is working really hard as he has several films in his kitty and it seems that the year 2019 is a year of luck for the 47-year-old.

Some time back the makers of Hobbs & Shaw released the second trailer from the film. Johnson shared the trailer on his Twitter handle and wrote, “Get that popcorn and tequila out again, cause we’re back with our second WORLDWIDE Hobbs And Shaw trailer. The biggest and baddest showdown of the summer hits AUGUST 2nd. Until then, cheers & enjoy.”

The three minute, the thirty-seven-second trailer features Dwayne Johnson as Luke Hobbs with Jason Statham as Deckard Shaw. Idris Elba is playing a criminal mastermind who is looking for a virus, which can erase half the population. Shaw’s sister (Vanessa Kirby) stole the virus from Elba.

The trailer also depicts the camaraderie between the two leads, Hobbs and Shaw.

The trailer will take you through a lot of action, explosions and of course, cars.

‘Hobbs and Shaw’ is being helmed by David Leitch and written by Chris Morgan and will hurtle action around the globe from LA to London and from the toxic land of Chernobyl to the beauty of Samoa.

The ninth film in the ‘Fast and Furious’ franchise is slated to hit the theatres on August 2.

Also, Johnson who is very quick on sharing pictures from the sets of his film, recently posted the picture announcing the wrap up of his next film Jumanji 3 on his Instagram.

The actor shared a picture with co-stars Jack Black, Kevin Hart and Karen Gillan on Instagram, captioning it as, “And off into the desert sunset our favourite video game avatars go.”

Jake Kasdan, who has co-written the film with Scott Rosenberg and Jeff Pinker, has directed it as well. The film will premiere on December 13.