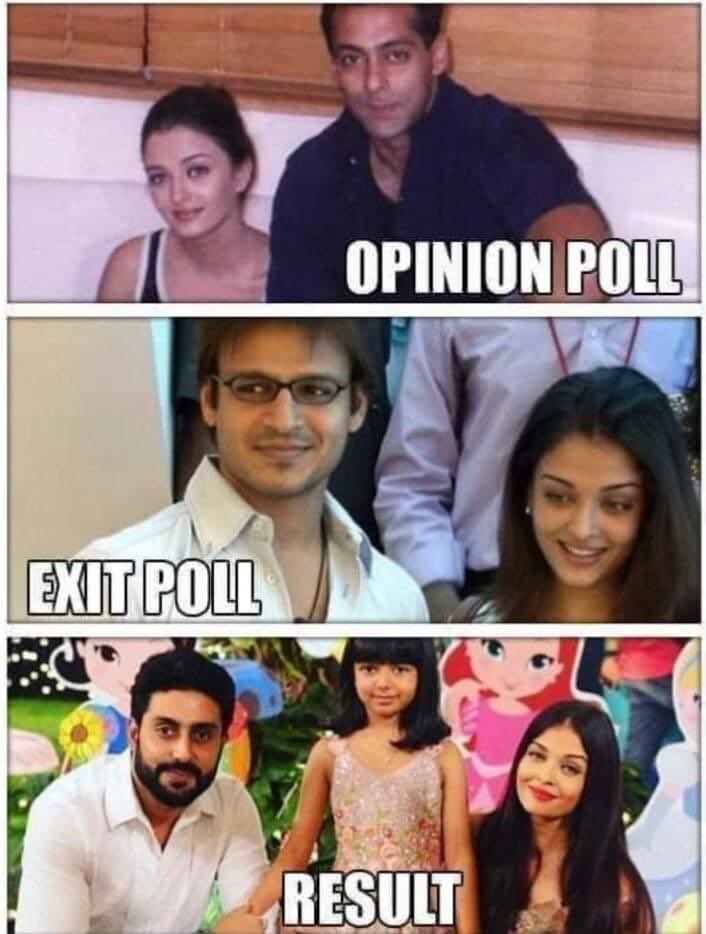 MUMBAI: While the whole nation is looking forward to the final verdict of 2019 Lok Sabha elections, Vivek Oberoi decided to take a dig at the exit polls with a tasteless joke referring to his ex-girlfriend Aishwarya Rai and her relationships, and is now being slammed for it.

The post referred to Salman and Aishwarya’s relationship as the ‘opinion poll’, Vivek and Aishwarya’s affair as the ‘exit poll’ and her current family with husband Abhishek and daughter Aaradhya as the ‘final result.’

Comparing the way Salman addresses Aishwarya in public with Vivek’s tweet, a user wrote, “One there is Salman Khan who doesn’t event take Aishwarya’s name without her full name (i.e. Aishwarya Rai Bachchan) and then there is vivek oberoi who is so shameless that he is not only sharing such a disrespectful meme but also dragging a minor into this. Shame on you.”

“It is hardly hilarious. It’s crass, disgusting and reveals the sick mentality of its ‘creator’@vivekoberoi. Evident that the man lacks everything – political as well as life skills,” Swati Maliwal, Chairperson, Delhi Commission for Women, said.

It is hardly hilarious. It’s crass, disgusting and reveals the sick mentality of its ‘creator’@vivekoberoi. Evident that the man lacks everything – political as well as life skills. https://t.co/0shNo67lpX

Brother with all due respect…. this is not Good, delete it ryt now…. I have been ur supporter but this is Bad…Genuinely Bad…

Plz. Don’t spread this pics its demeaning to a woman N a torture to her child too.. Plz a humble request

Vivek is currently awaiting the release of his film, ‘PM Narendra Modi’, a biopic on the life of India’s Prime Minister. After many delays, the biopic is finally set to release on May 24.