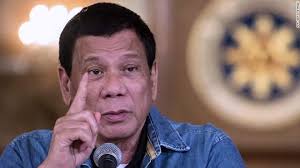 Philippine President Rodrigo Duterte is known for gloating about over the top violence, yet on Monday he went full Hannibal Lecter.

“I can eat you,” Duterte communicated, speaking genuine about mental aggressors. “Fundamentally give me salt and vinegar. Credible. Make me distraught. Get me a mental attacker.

“Give me salt and vinegar. I will eat his liver.”

Lecter is the described executioner savage of “The Silence of the Lambs,” known for completely muttering, “A check taker once attempted to test me. I ate his liver with some fava beans and a beguiling Chianti.”

Duterte’s eye-popping remarks came after individuals from the jihadist nonconformist social event Abu Sayyaf Group (ASG) conflicted with Philippines government troops on the visitor island of Bohol prior this month.

In discrete ambushes, no under 10 individuals from the dread get-together have been killed in the island locale in the most recent month. No under three more aggressors are still everywhere, as exhibited.

The contenders’ nearness in Bohol, an island in the south of the Philippines archipelago, mean an increase for the social event – by and large its exercises have been limited to the Muslim-lion’s share islands of Mindanao and Sulu, at the south of Bohol.

Duterte took control in June and has looked for after a full scale “war on pharmaceuticals,” which killed some place in the extent of 6,000 individuals in his basic six months.

In December, Duterte confessed to having slaughtered related convicts when he was official with Davao City.

He spoke Monday at the opening limit of the 2017 Palarong Pambansa in San Jose de Buenavista, Antique area.

Tending to understudies, guides and thought specialists from the 18 zones of the nation, the President asking for that they make compel, reasonableness, values and an estimation goodwill as they value the yearly wearing occasion.

Talking about mental activists, he communicated:

“They are creatures. In the event that you oblige me to be a creature I can be one. I can be the same. I can dish it more than what you can. Fifty times more than you can.”