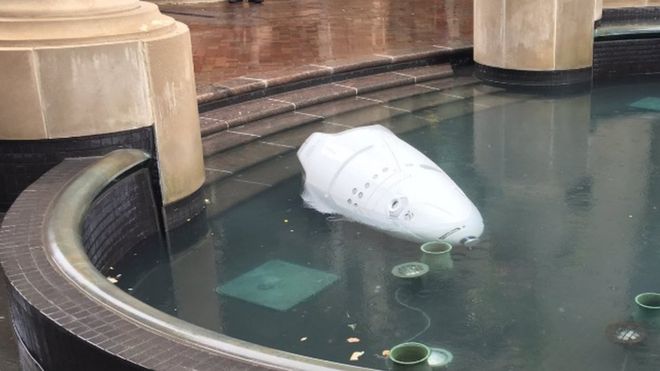 A security robot in Washington DC suffered a watery demise after falling into a fountain by an office building.

The stricken robot, made by Knightscope, was spotted by passers-by whose photos of the aftermath quickly went viral on social media.

For some, the incident seemed to sum up the state of 21st Century technology.

“We were promised flying cars, instead we got suicidal robots,” wrote one worker from the building on Twitter.

“Steps are our best defense against the Robopocalypse,” commented Peter Singer – author of Wired for War, a book about military robotics.

It is not the first accident involving Knightscope’s patrolling robots, which are equipped with various instruments – including face-recognition systems, high-definition video capture, infrared and ultrasonic sensors.

Last year, a 16-month-old toddler was run over by one of the autonomous devices in a Silicon Valley shopping centre.

And earlier this year, a Californian man was arrested after attacking a Knightscope robot.

The man, who was drunk at the time of the incident, later said he wanted to “test” the machine, according to Knightscope.