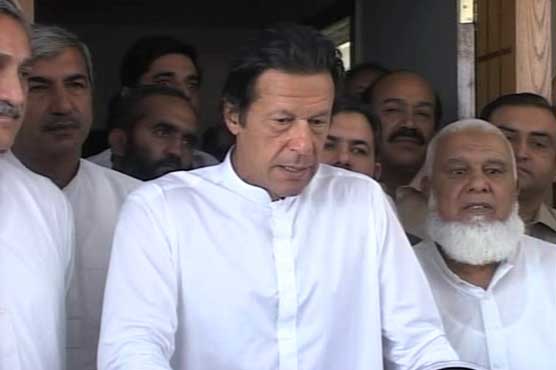 Imran Khan, Pakistan Tehreek-e-Insaf (PTI) chairman on Tuesday has said that Awami National Party (ANP) and Jamiat Ulema-e-Islam-Fazl (JUI-F) rigged the Khyber Pakhtunkhwa (KP) local body (LB) polls.
In a press conference, Imran Khan expressed his views regarding KPK LB polls. He said that those political leaders who are demanding Cheif Minister (CM) Pervez Khattak’s resignation should also demand Prime Minister (PM) Nawaz Sharif’s resignation for riggin the General Election 2013. He said that all parties said that General Election 2013 was rigged then why don’t they demand Prime Minister’s resignation? Khan said that it’s evident how ill the intention are of those who are demanding KPK CM’s resignation.
Khan also said that Gilgit-Baltistan (GB) did not have a neutral set-up for assembly elections.
“Electricity blackouts have increased and any decrease in its price is nowhere to be seen.” said Khan “Nadra has the record of all those who do not pay tax or by some illegals means evade it, those people should be charged.”
He reiterated that he belives that current Parliament is fake and the only reason he went back was Yemen conflict. Otherwise he doesn’t have any faith in ruling parties.
Responding on a question about re-election in KPK, he said that he and his party are ready to hold re-election under Pakistan Army’s supervision.