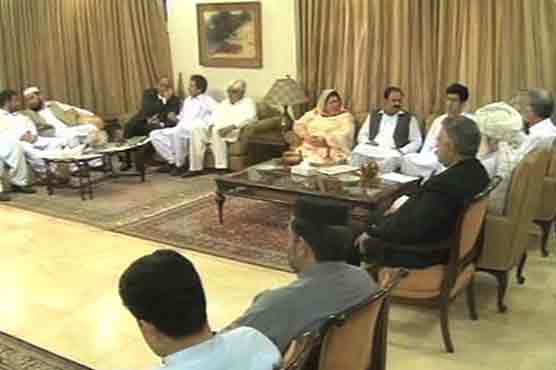 All Parties Conference (APC) called by Khyber Pakhtunkhwa (KPK) goernment over local bodies election has decided to form commission to probe KPK LB polls.
Pervez Khattak talked to media after APC and told that the authorities have formed an administrative committe to probe into rigging allegations and we also encourage people to come forward with evidence including videos and audios. He assured that the committee will take action within a week.
CM KPK added that this is the job of Election Commission of Pakistan (ECP) to deal with the prodecural issues where returning officers did not abide by the electoral process rules and were found guilty for the irregularities in electoral process. He said that he had never given any order to any returning officer to stop results.
Qaumi Watan Party’s Sikandar Sherpao and Aneesa Zeb, Pakistan Muslim League-Quaid’s (PML-Q) Intekhab Chamkani and Jamat-e-Islami’s Professor Ibrahim attended the conference.
According to the details, the APC was chaired by Pervez Khattak, Chief Minister of KPK, in which the leaders of Jamiat-e-Ulema-e-Islam (JUI), Pakistan Peoples Party (PPP), Pakistan Muslim League-Nawaz (PML-N) and Awami National Party (ANP) boycotted to take part.
On the other hand, three of the big opposition parties ANP, PPP and JUI-F have announced strike on June 10.
As per the details, opposition parties have announced a shutter-down strike on June 10. Leader of the 3-party alliance Mian Iftikhar Hussain said that the pressure will be applied from all sides till government’s resignation.