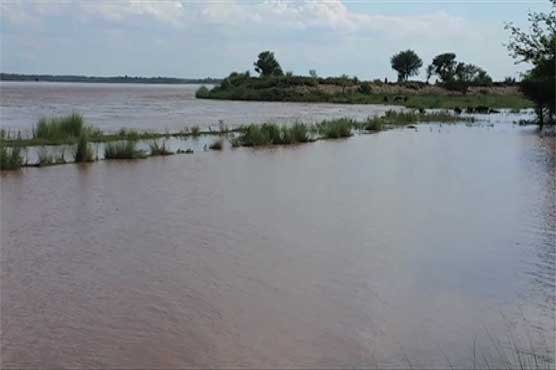 On tuesday morning a violent pressure of 131,000 cusecs crossed through river Chenab at head Qadirabad in Mandi Bahauddin which led to a flood in many villages. Low lying areas were immersed in flood water because of the erosion of the land at Qadirabad and Farrukhpur Bhattian. While on the other side water inflow at head Panjnad in Muzaffargarh rose upto 84,133 and outflow got upto 69,353 cusecs. The water level in Indus river is continuously rising at head Taunsa and Guddu barrage. A flood with rapid pressure of 400,000 cusecs from Chasma Barrage has entered Layyah, influencing low lying areas in the city. Jawad Akram, director general provincial disaster management authority (PDMA) stated that his department is keeping a watchful eye on the flow of the water in rivers and nullahs throughout the rainy season. in the statement he said that information is being transferred from Lahore warning centre to the people concerned with flood alert.  In the mean time a control room has been made in the office of deputy commissioner Peshawar to keep an eye on the flood situation in the city during the monsoon period.