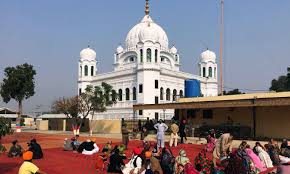 The construction work of Kartarpur Corridor is going on with full pace, and the Indian government has confirmed the Sikh pilgrims about the fast ongoing development in the region. The news comes right after a famous newspaper article blamed that India is lagging behind Pakistan on the corridor project.

The Indian government has assured Sikh pilgrims of the ongoing work at the Kartarpur Corridor that will allow Indian pilgrims to visit the famous gurudwara of the founder of Sikhism, Gurunanak Dev on the Pakistani territory.

Assuring the ‘concerned’ Sikh Pilgrims about the development, and has given a detailed description of the work that is underway: a passenger terminal building, a four-lane highway, and other important amenities. India has said that everything is being built at a fast pace and Sikhs need not worry about any sort of delay in the project.

India’s response on the development of Kartarpur Corridor comes after The Tribune newspaper showcased a report suggesting that India is lagging behind, whereas Pakistan has completed more than 70% of the development work.

In an interview to The Tribune, Punjab Minister Sukhjinder Singh Randhawa had stated that Pakistan has completed more than 70% of the work on its side, but he is concerned about India which is working at an extremely slow pace.

However, India’s response has cleared the misunderstanding. A senior official of the Indian government has stated:

“A four-lane highway connecting zero points of Kartarpur Corridor to National Highway 354 is being constructed by NHA of India. We have completed 45% of the work, and we assure Sikh pilgrims that the road will be fully completed by the end of September 2019.”

The Indian official also mentioned that the Land Ports Authority of India is constructing a state-of-the-art passenger terminal. The complete job of the Corridor will be done at a price of Rs. 177.50 crore by October 31st.

It is to be noted that both the construction engineers of Pakistan and India will hold meetings on July 14, regarding the development and infrastructure work underway. Kartarpur Corridor is expected to be completed by both the side, before the grand 550th birthday celebrations of Guru Nanak Dev in November 2019.